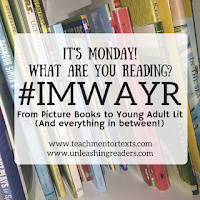 Visit Jen at Teach MentorTexts and Kellee and Ricki at UnleashingReaders to see what they've been reading, along with everyone else who link up. Sheila at Book Journeys began this sharing, and it's now hosted by Kathryn at The Book Date.

I enjoyed my reading this week, had a great time reading with my granddaughters, mostly old favorite Christmas books.  I'm also trying to catch up on some picture books that have been well reviewed, and I still haven't read. Some of those are below, and are good for many occasions.

Salt To The Sea - written by Ruth Sepetys
From inspiration begun through her father’s cousin, Erika Demski, Ruth Sepetys has spent years researching in documents and museums, following leads for interviews that took her to three countries. Sepetys writes in her acknowledgements that Erika fled to the coast in the evacuation ordered by the Nazis, escaping from the Russians. She obtained a pass for the doomed Wilhelm Gustloff, but fortunately missed the voyage and sailed on another ship. The acknowledgements alone fascinate, that Depetys took such care in creating a fictional story in order to share this little known and terrible tragedy from the end of World War II. An estimated 9,000 lost their lives when the ship, Wilhelm Gustloff, was torpedoed by the Russians.
Seven people are key in this ‘family’ that has been created. They begin as a smaller group, helping each other, on foot, with one horse and a cart, desperate to reach the coast, hiding in the forest, wary, dirty, exhausted. Two have not joined in yet, but will need the help of the larger group. One speaks from another place, a strange and dreamy tale until the connection among them all is finally made. Whether they choose it or not, the story is told as a family forms, touching, talking, supporting, defending. Sepetys creates the story by letting four of this group talk: Joana, Florian, Emilia and Albert. The story told by these four carry the story, allowing for interactions among all but Albert until nearly the end. Through their words, we also meet the kindness and wisdom of the Poet, an older shoemaker, and the wandering boy; a young child found wandering by the Poet, who has taken him in. The story alternates between the speakers, brief passages that reveal bits of the characters’ abilities and their past, adding some of the history of that terrible time when all of Germany was on the run. Each has secrets, enticing, sometimes predictable, but until the end, Sepetys keeps the reader wondering about the outcome. It’s a compelling story of both amazing endurance and terrible grief.
This book will be published in early February. Thanks to NetGalley and Penguin Teen for an advance copy. 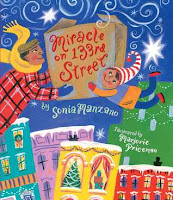 Miracle on 133rd Street - written by Sonia Manzano and illustrated by Marjorie Priceman
What a lovely story of different families who live in the same apartment house, but rarely see each other, each having unique personalities: one worried about the money spent on Christmas, another about burglaries, one wondering what gifts to buy for seven nephews. Young José tells the story, and begins with his mother, homesick for her beloved Puerto Rico, groaning about the smallness of the apartment, and the wonderful Christmas roast won’t fit in the oven. His Papi says they can take it to be cooked at the near pizza place, and so they do. The magic that happens, even José about to pluck the stars, and the gorgeous, colorful and happy illustrations makes one smile and smile. It turns out that the community celebrates together, and the apartment is not too small.

No Yeti Yet - written and illustrated Mary Ann Fraser
On a very snowy day, an older brother takes his little brother out for a yeti hunt. It’s a perfect 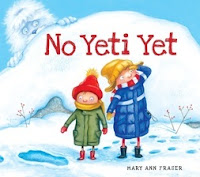 day for a yeti, but they don’t seem to see one, at least that older brother who thinks he knows so much doesn’t. Any young child will continue to see that sneaky Yeti, but the boys keep looking and looking, until. . . There’s a wonderful surprise ending that will make all readers happy. Beautifully done pictures of snowy scenes, including some little animals in the woods along with that “hidden” yeti.

The Only Child - written by and illustrated by Guojing

From her childhood in China with the law restricting families to only one child, Guojing, an illustrator from China, imagines an amazing story from one time when she was lost as a young child. This little and lonely girl, suddenly lost, follows a mysterious stag and ends up in friendship with it and other sweet creatures. on a journey of love and wonder. The mysteries of the imagination of a child are shown with awesome beauty. They make you want to look again and again.

Pool - written by and illustrated by JiHyeon Lee 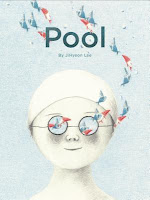 It’s a very crowded pool, so too shy children decide to do something different, dive deeply to see what’s under all those legs and arms and bodies. With a watery background, interesting fish appear, sometimes cute, sometimes chasing other fish, sometimes so big they’re scary. The ending of the adventure is pleasing with shy smiles, and perhaps a new adventure coming? I read this together with my four year old granddaughter, who does love books, but talked through it, pointed out unusual details of the fish, and thought it might be a little old for her. Perhaps in some part it was, but later when I was busy doing something else, I noticed that she pulled the book back out of the stack, and took a long time “reading” the pages again. She was mesmerized. 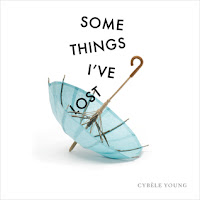 Some Things I’ve Lost - written by and illustrated by Cybèle Young
Here are amazing transformations from those ‘things’ lost like a set of keys, an umbrella or dad’s bag on the subway to eye-popping double-page paper sculptures of what “can be”. The brief text describing “what” is lost and where it was last seen amuses and tells quite a lot considering the few words used. For example, “Object: Binoculars  Last Seen: Backyard--meteor shower.” It can be used as a mentor text for an art project or for a project showing change. Love book to read and see.

Next: I struggled to choose what's next, was looking for one that I've missed and need to read. Finally I chose Winger by Andrew Smith, but if you have others you believe I must read, offer a title in the comments, please!

Best wishes for a wonderful holiday break to everyone!
Linda B at 10:09 PM
Share